Malawi is blessed with a rich diversity of flora and fauna and has no less than nine National Parks and Wildlife Reserves. Although it may not have quite the sheer numbers of large mammals as some of its better known neighbours, it makes up for this in other ways by providing intensive and exclusive wildlife viewing in unspoilt areas of genuine wilderness with very few other visitors looking on. Malawi is also in the middle of a wildlife revolution with massive investment in a number of of its protected areas resulting in a boom in wildlife numbers and, so far, two of its parks & reserves becoming home to the ‘Big 5’.

Malawi offers some fantastic wildlife experiences. Safaris here are varied and thrilling. As well as the usual safaris by vehicle (in Malawi they use open-topped 4x4s rather than mini-buses), all of Malawi’s parks & reserves offer walking safaris, and in the 3 that have the broadest stretches of river, wildlife can be viewed courtesy of boat safaris.

Birdwatching is an experience that can be had pretty much everywhere in the country because of the remarkable number and variety of species found. The highlands, wetlands and parks & reserves are hotspots for  wildlife viewing of the feathered variety.

For those visitors keen to make an even more positive difference to Malawi’s conservation efforts, there are also opportunities to get involved in Conservation Volunteer Projects.

In recent years the Parks and Reserves have undergone something of a transformation, with private concessionaires helping to improve conservation and the quality of viewing.

In the South is the country’s longest established – Liwonde National Park, with excellent accommodation and the country’s best game viewing. Emerging rapidly is Majete Wildlife Reserve, subject to a re-stocking programme and now a ‘Big 5’ destination. Majete has two neighbours in the Lower Shire Valley which have not yet received the same level of investment. But Lengwe National Park has privately run accommodation and is known for its buffalo herds, whilst Mwabvi Wildlife Reserve remains little visited and is best known for its unusual rock formations. At the southern end of the Lower Shire Valley, Elephant Marsh is an important wetland for birdlife. Chimwenya, not far south-east of Blantyre, is one of very few private game parks in Malawi. Here. an area of indigenous forest has been lovingly preserved and restocked with giraffe and plenty of large antelope.

In Central Malawi, the once great Kasungu National Park is sadly now rather forgotten and neglected, but the nearby rugged wilderness of the Nkhotakota Wildlife Reserve is opening up and promises much, having remained largely untouched for years. It has new lodges and was recently the recipient of the largest elephant translocation in human history.

In the North, the Nyika National Park is one of Malawi’s jewels and offers unique wildlife viewing on its rolling grassland plateau. Nyika is complemented by neighbouring Vwaza Marsh Wildlife Reserve, a lowland area offering a more traditional bush-game experience.

Remarkably for a capital city, the Lilongwe Nature Sanctuary lies in the centre of the city. An oasis of green it is home to a variety of birds and a few smaller animals, and also the base of the Lilongwe Wildlife Trust, who work tirelessly to protect Malawi’s wildlife, including provide sanctuary and rehabilitation.

Although designated for the protection of the landscape and vegetation rather than the animals, Malawi’s Forest Reserves found across the country provide good habitats for a number of animals. Though not safari destinations, viewing of smaller mammals is not uncommon in the forest reserves and the birdwatching is often excellent.

Of the easy to access Forest Reserves, Dzalanyama and Ntchisi are both a relatively short distance from Lilongwe and are known for their excellent birdlife. the mountains of Mulanje and Zomba are also home to forest reserves, but the landscapes tend to dominate the focus in those locations!

Big cats were previously only occasionally seen in Malawi but the re-introduction of lions into Majete and Liwonde, and of cheetahs into Liwonde in recent years have changed that. The leopard is found across almost the entire country, with great concentrations at Nyika, but as with anywhere, its elusive lifestyle makes sighting difficult. Of the smaller cats, civet is the most widespread though genet, serval and wild cat may also be seen. Hyena are the most common of the other major predators and can be spotted in all the protected land areas. Jackal also have populations in Malawi but are less frequently seen.

Black rhino have been successfully re-introduced and can be seen in Liwonde and Majete. There are good elephant populations in all the protected areas except the low lying Lengwe and Mwabvi. Hippos are numerous in Malawi and are commonly seen the Shire River, where they number in the thousands. Crocodiles are also common in the Shire.

Buffalo and zebra are common sightings in all areas. Of the antelopes, bushbuck, grey duiker, kudu, grysbok, klipspringer and reedbuck are found in most of the protected areas. Roan and eland can also be seen, particularly in Nyika, whilst Liwonde and Majete are the most likely places to spot sable and waterbuck. The rarest species, Livingstone’s suni and the beautiful nyala, have good populations in Lengwe. Malawi’s Lower Shire Valley is the furthest north of all nyala habitats in southern Africa.

Other mammals in the country include monkeys and baboons, bushpig, warthog and porcupine.  Giraffe were reintroduced to Majete in 2018.

Malawi is truly an ornithologist’s paradise. Few countries in the whole of Africa can rival Malawi’s range of bird species coupled with the relative ease of birdwatching. Around 650 species have been identified, spread across the countries diverse landscapes, with over ten per cent not being seen in other parts of southern Africa. They are primarily woodland or grassland varieties including Livingstone flycatcher, red-winged francolin and the endemic Lillian’s lovebird. However, the lake, rivers and dams also attract waterbirds such as hamerkop, fish eagle, kingfishers, egret and pelican. Raptors, like the African marsh harrier, black-breasted snake eagle and peregrine falcon, give further variety. For further details, see the Birdwatching pages.

For a series of image galleries showing a large number of Malawi’s most beautiful birds, visit the Planet’s Alive website run by wildlife photographer Marie-France Grenouillet.

The variety of fish, an estimated 1000 species, to be seen in Lake Malawi is unequalled anywhere else in the world. The Lake has more species of fish than all of the lakes and rivers of North America and Europe combined! The majority are cichlids, mostly endemic to Malawi and these small, brightly coloured mbuna can be seen along the length of the Lake. The Shire River through Liwonde and Majete also supports good fish populations including sungwa and tiger fish, whilst the Bua in Nkhotakota has mpasa (lake salmon), popular with anglers. 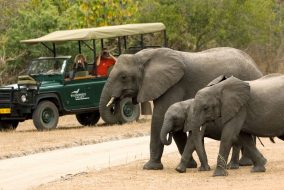 Safaris in Malawi offer thrilling wildlife viewing by a choice of methods and in an amazing variety of environments, but without the crowds of mass tourism. 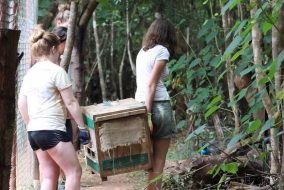 Volunteering with wildlife is a becoming more common as Malawi continues to be at the forefront of wildlife conservation in Africa. 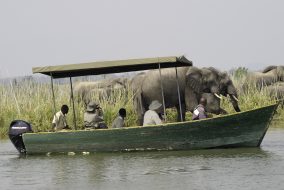 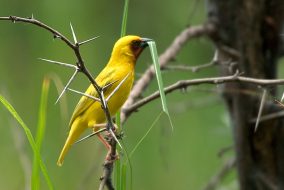 Malawi's varied terrains and environments create a birdwatcher's paradise. Around 650 different species have been identified and birds can be seen in the reserves and all across the country. 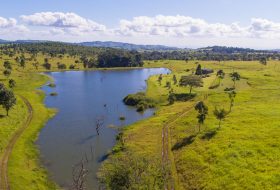 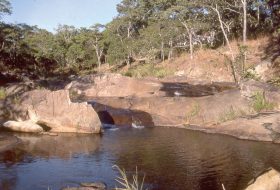 Dzalanyama is approximately 40 km from Lilongwe and covers the steep range of hills which bear the same name. It's a beautiful natural environment to explore and enjoy. 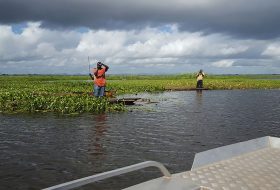 Elephant Marsh is part of the flood plain of the River Shire. Though now devoid of elephants it is still home to a fantastic array of birdlife. 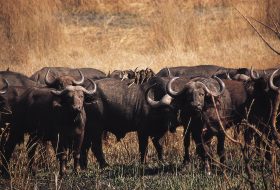 Kasungu National Park is an 800 sq mile area of natural woodland and bush with stretches of open grass. Poaching has reduced numbers but there is still wildlife to be seen. 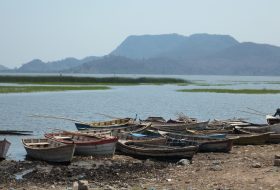 Lake Chilwa is Malawi’s second biggest lake, home to unique fishing villages and a designated wetland of international importance because of the huge bird populations it supports. 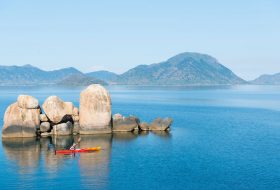 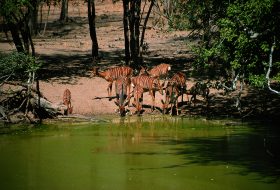 Lengwe National Park is 350 sq miles of dense vegetation with good birdlife and a number of mammal species to be seen. It is only an hour or so from Blantyre. 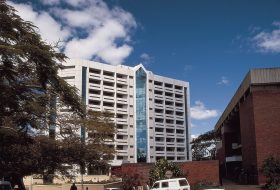 Lilongwe is Malawi’s capital. The Old Town is distinct and has the appearance of a traditional African settlement, whilst the City has much in common with other twentieth century urban developments around the world. 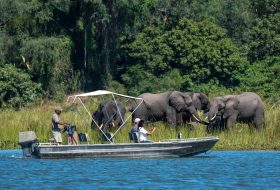 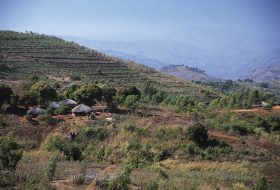 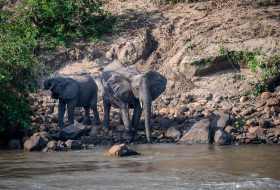 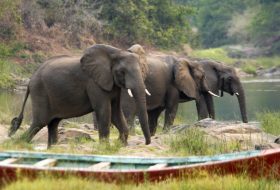 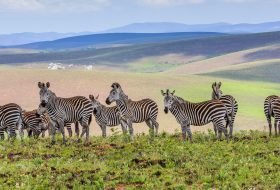 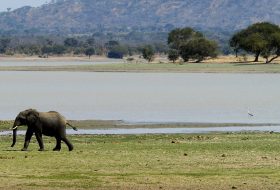 Vwasa Wildlife Reserve, an area of marsh and plain, with a few rocky outcrops, is all of 400 sq miles (1000 sq km) and lies along the Zambian border north-west of Mzuzu. 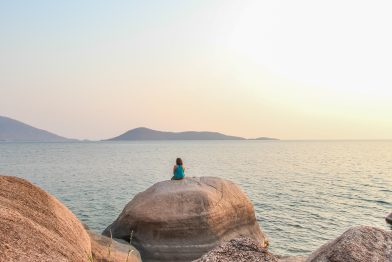 Lake Malawi is the jewel in the crown of the country’s tourist attractions, “discovered” by the missionary-explorer Dr David Livingstone just over 150 years ago. 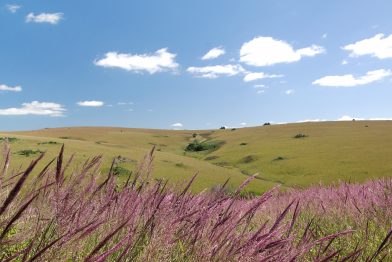 Malawi has a massive diversity of beautiful landscapes. The highest peaks in Malawi touch 10 000ft (3 000m) while the lowest point is barely above sea level. 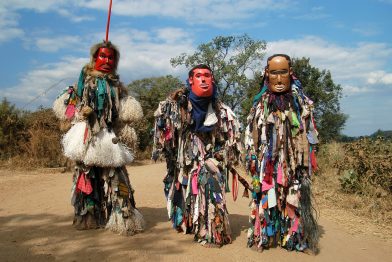 The Malawian people are, without doubt, its greatest asset: friendly and welcoming to a fault. Every visitor is met with a smile. 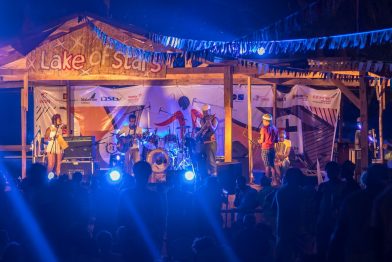 Malawi has much offer when it comes to events, with musical, cultural and sporting events throughout the year. 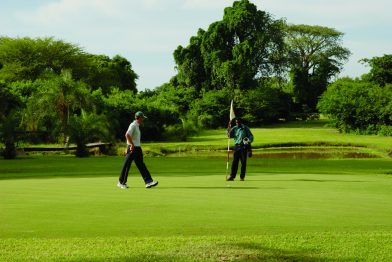 As well as the various outdoor and water activities, Malawi offers a few organised sports and wellness activities.