The Lake of Stars Festival is an internationally renowned music festival that takes place on the palm fringed shored of Lake Malawi each year. This year will mark the sixteenth year of the sensational music and arts festival. Though in 2017 the LOS festival took a break to focus on other projects, they returned in 2018 at Leopards Bay in Salima to hold their biggest festival to date.

This year, the magic of Malawi’s ‘Lake of Stars’ will appear again as songs, dance, culture and art travels from across the globe to perform in one of Africa’s most diverse festivals. Over the three-day event, nearly a hundred acts will perform across 3 stages. This year’s festival will take place and the imaginative Kachere Castle from 27 – 29 September 2019. More information can be found in this article.

All tickets will include camping on site at this year’s festival. Guests will need to bring their own camping equipment to use. The stunning new site is remote and access is limited.

Tickets will be very limited for the 2019 event and tickets must be purchased in advance only with no tickets sold on the gate. Check the current availability for tickets here.

Festival director, Will Jameson, spoke about one of the previous events:

“It was epic. We’ve had thousands of people attend from all over Malawi, Africa and the world. We’ve had incredible performances from Gwamba and Lucius Banda through to Mercury Prize winners Young Fathers and Zimbabwe’s afro-rockers Mokoomba. This has been our best yet, with diverse acts on and off stage. Highlights have been the Burundian drummers, the Vagina Monologues Malawi and our interactive technology tent. We want to thank all the volunteers and sponsors who made this year so special. Dates for next year are out now – plan your trip and come with us to Lake Malawi.”

Check out the highlights from the 2018 festival:

More information on the Festival can be found at www.lakeofstars.org

A History of the Lake of Stars 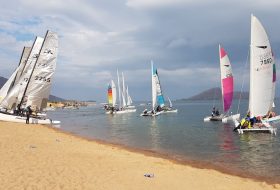 The Lake Malawi Sailing Marathon (LMSM) is an annual sporting event in the Malawi calandar. Established in 1984, the event was created by a group of sailors, which began as a casual sail northward up the Lake, with deck chairs lashed to the hulls.